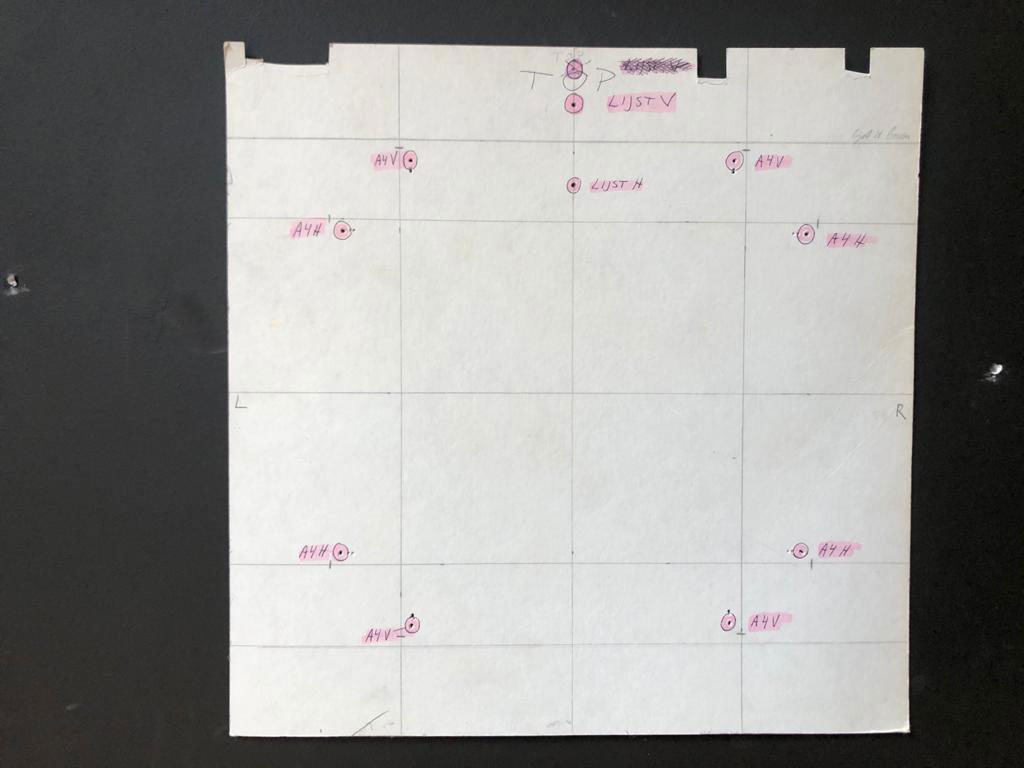 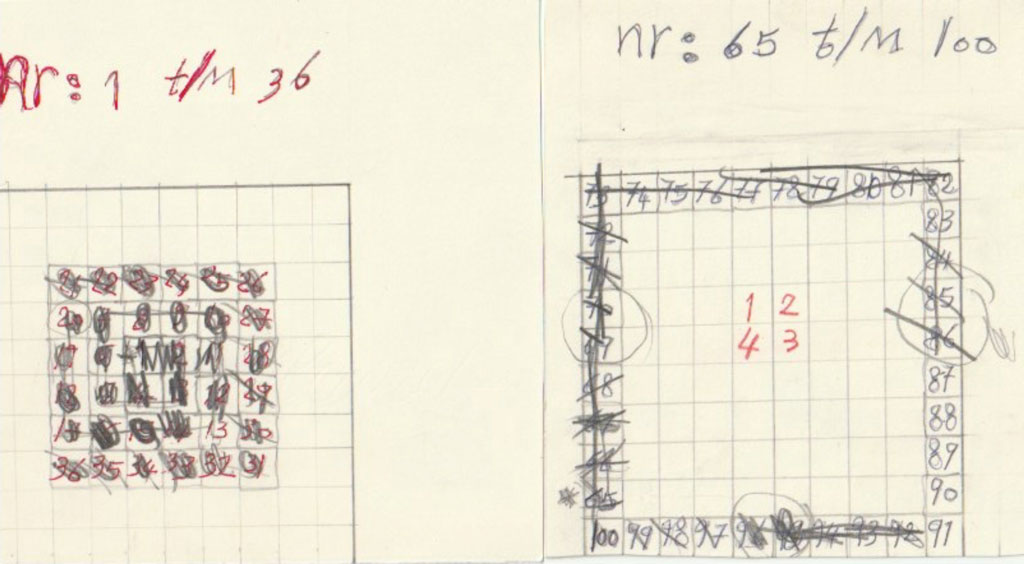 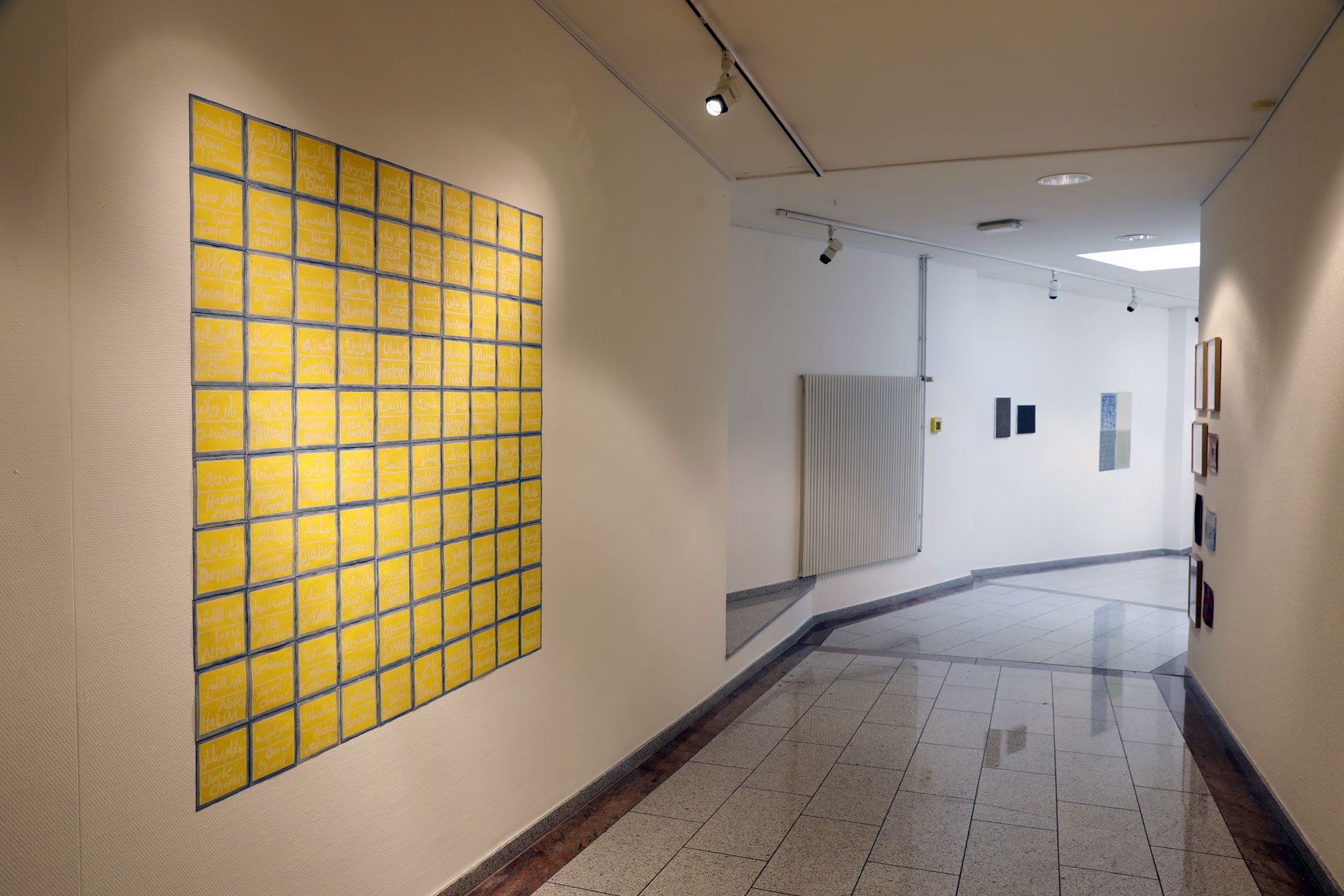 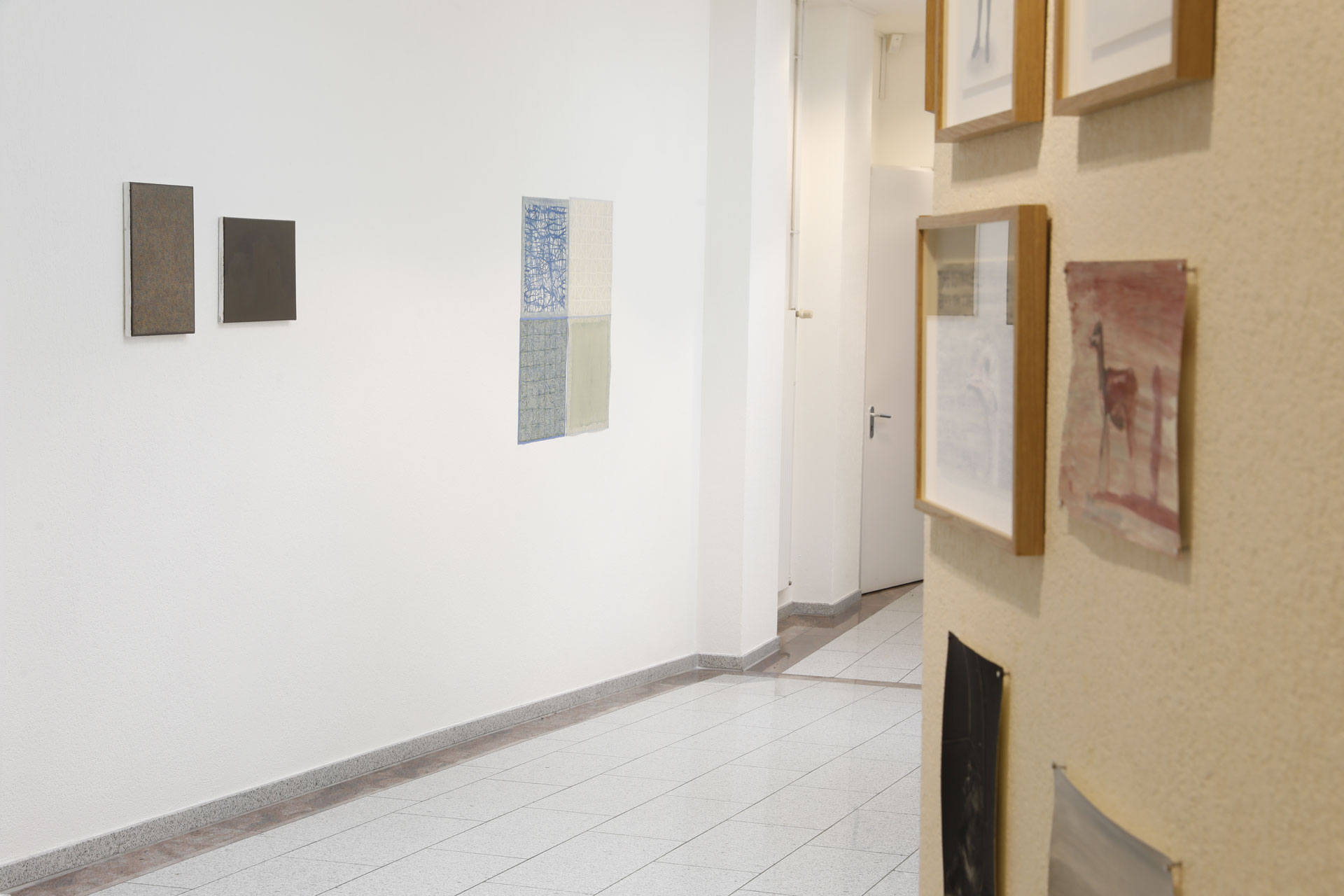 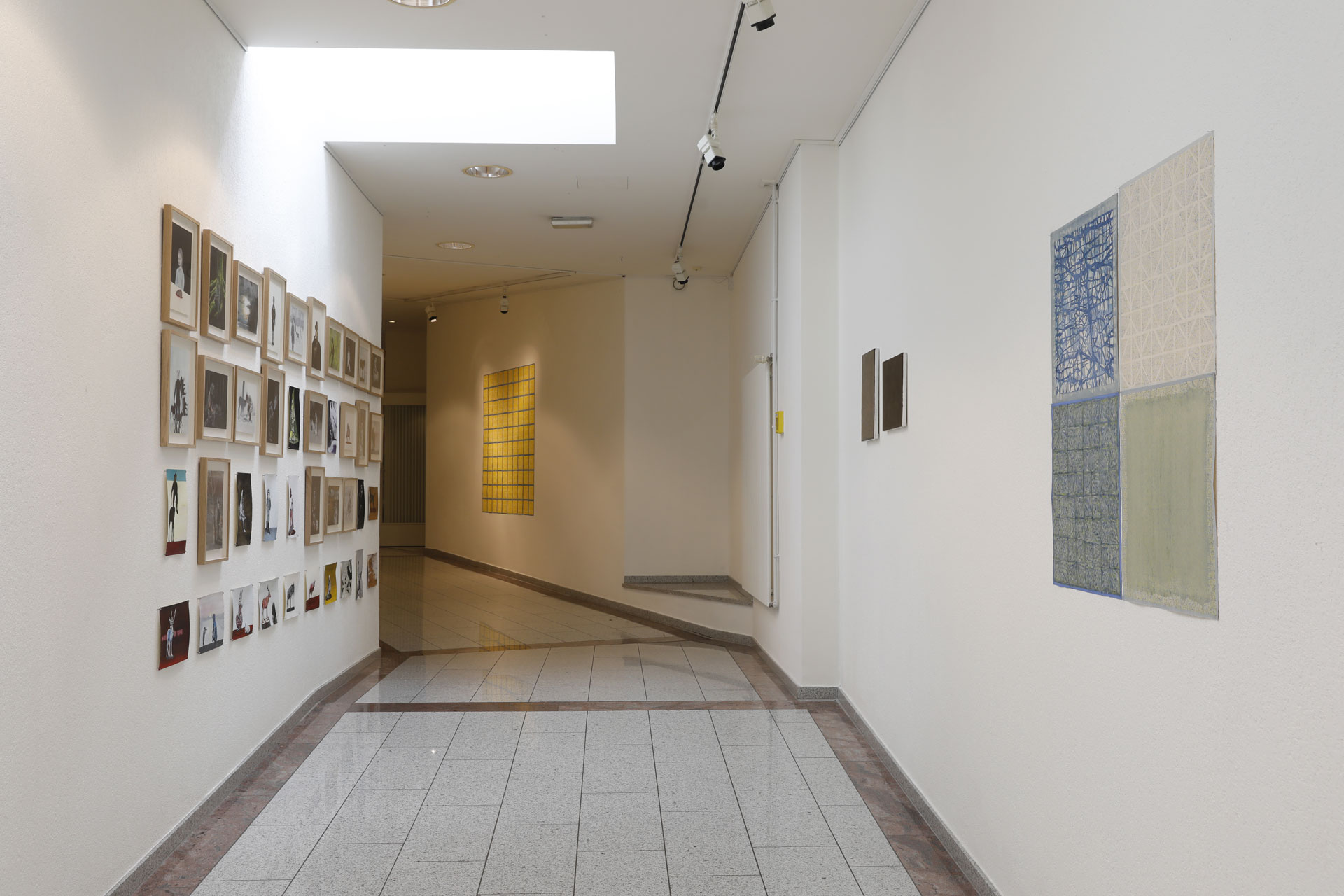 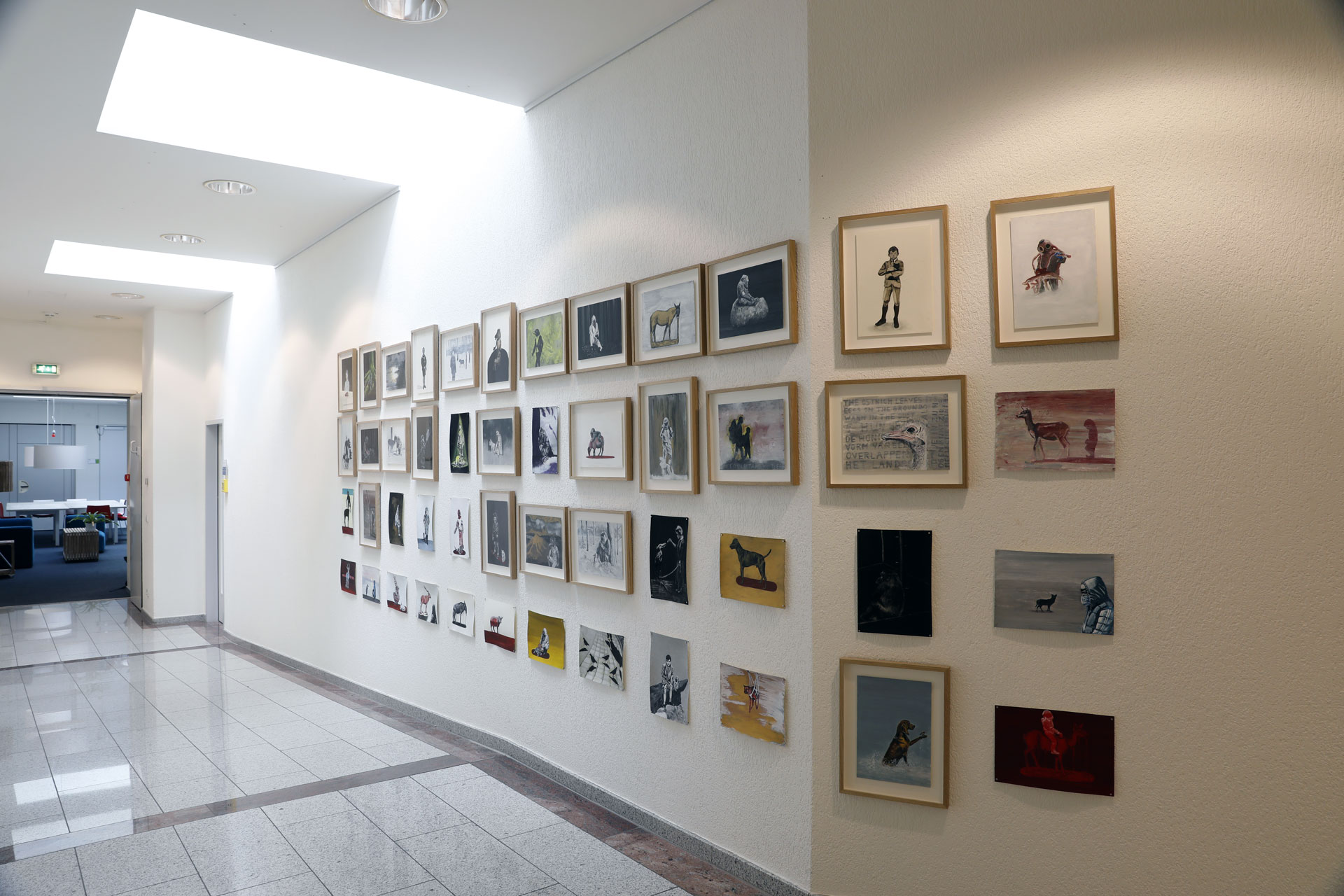 Photos of the exhibition by Bas Czerwinski

The content of this interview attempts to tie in with the intention of the curators of Passages en passant: to facilitate a meeting between the work of two artists in the special exhibition space in part of the Goethe-Institut’s corridor. My questions therefore focused on the interaction between the artists, their interaction with the space – and the place of each other’s work in it – and the interaction of the visitors with the artworks. The interview was designed as a two-way conversation in which the artists complemented each other.

F: Kathrin [Wolkowicz] asked me for this exhibition – and whenever Kathrin asks me to exhibit my work I immediately say ‘yes’. I don’t say ‘no’ much anyway, because it’s always an honor when people want to show your work. She asked me to show the large, yellow work [Study of Square / To my generation]. I have shown this work once before, at Sanaa gallery in Utrecht, and it was sold. For this exhibition it was loaned. I supplemented this work with other work that I found suitable for this exhibition. The underlying idea behind all the work I make is the same – it is always about the connection of perception and memory.

M: Marco [Douma] asked me to show work from the series Daily Drawings. This series of drawings came about during the lockdown. Every day I made one and due to each’s state of mind of that day, every day brought a new way of drawing. The goal of the project was to give myself space and see what came up each day. Most of the works are figurative, but some are more abstract or contain text­­ –­ whispers. When I was invited I looked up Fatima’s work; I didn’t know her too, but many people around me did. The space [in the corridor at the Goethe-Institut] I also didn’t know yet either.

F: I did know this place already: friends of mine have exhibited there. And I have a lot with both the place and the name. I have good memories of the name Goethe through his book Faust. The Goethe-Institut also has locations in my native country Iraq that are very active and very appreciated for contemporary art and culture. Here I like everything about the Institut: the atmosphere during openings, the people who work there. I didn’t know Miriam’s work yet, but my partner, who is also an artist, already knew her work. When I had looked at pictures of her latest work online I decided that the collaboration would be fun.

M: I invited Fatima to my home to see the Daily Drawings #100-200 exhibition. I immediately liked her work, even though it is a bit further away from my work. Because I found both her work and the architecture of the [exhibition] space interesting, I said wholeheartedly yes to the invitation. The timing was also nice: I could see here if my work could go out into the world – the first step outside is always exciting.

M: Our first introduction was here, with the four of us. Marco and Kathrin had each nominated one of us and agreed that they would leave the meeting between us – and between our work – free and open. This exhibition project is also about their dialogue and the space they want to give each other. We looked at the space together; it offers all directions: downward and upward to the light. I immediately wanted the wall I got because of that crazy kink – because of that kink, the space is upward, toward the daylight.

F: People said, “your work has been acquired by museums and now you’re going to hang it in a hallway,” but it’s the most beautiful hallway I’ve ever seen. For the big, yellow work (measuring one and a half by one and a half meters), I wanted a wall that wasn’t too big, a wall that would be a little framed. I already had this place in mind as a good place for this work and so this work found its place first.

M: I was worried about the relief of the wall, the somewhat coarser drawing that lies in it. In the end that didn’t seem to matter at all, also because part of my work is in a frame, so the surface of the wall is different. But with Fatima’s work, the wall doesn’t bother me either. At home I showed the work on a smooth, black wall and that’s why I first wanted the wall here to be black as well. Later I didn’t think about that and I’m glad I forgot. The work can handle this wall very well. We also wanted breathing room in the exhibition, so all one hundred works would have been too much. So although I skipped days, and was not able to include all 100, the works are shown chronologically.

F: Initially I wanted to show one work. It seemed nice, just one work. But because Mirjam wanted to show a lot of dark work, I decided that I would also show more works because otherwise the walls would not be balanced. Then I looked at my studio to see what went well together and brought that together: some more figurative works, some different backgrounds and surfaces and work from different periods. At home I had already chosen the works, but here I decided what worked where. Together, Mirjam and I developed a process of working together, of thinking together, during the construction days. It may seem that our work forms a figurative and an abstract block, but if you look closely you will see that both are figurative and abstract. The blocks seek dialogue with each other; because of this, it becomes an encounter.

M: We had discussed the set-up at length, but in the end I did it differently.

System for hanging the drawings of Mirjam Somers

M: Fatima said, “do it the way you think you should do it.” That was nice. For a long time I had planned to make a cloud of works, a somewhat organic and irregular form, precisely in response to Fatima’s work. But in the end that didn’t work. It turned out not to fit the work – and so I hung it in the same rigid frame I use at home. The center of the work is fixed here because it always falls on the same (center) point within a square frame – whether it is landscape layout or portrait layout and with or without a frame.

F: My arrangement works differently. The yellow work [which consists of 100 parts] is organized from the center, like a snail. At the center hang Nietzsche, Zarathustra, Aristotle and Avicenna and if those hang straight then the rest will hang straight too. Although it was difficult here, because I had no laser to check it and the wall is not flat. I asked myself, “why do you make your work so difficult?”. I often make it difficult for myself.

M: We worked together for a day here first. Then, among other things, we decided where my work would begin and end. Fatima responded to this in turn. Her two dark, figurative cloths vibrate with my work. My work can be quite heavy and that’s why the light from above works so beautifully here, it still allows you to escape.

M: The opening was relaxed – some of the visitors had a mouth mask and some didn’t – there was a group standing by my work and a group by Fatima’s work and then it changed.

F: Everyone always looks at the first work – that’s a kind of stopping point. Some walk on afterwards, to the drinks, while others almost stand against the work to admire it. One person, a colleague, didn’t like it – he thought our works had nothing to do with each other. I think a meeting like this doesn’t have to be between artists who are like-minded and already know each other.

M: During the preliminary discussion and the build-up we met and together we looked together for a form that worked for both of us – and this interview is another meeting, now we are talking about it again.

Eva Visser is a Rotterdam based historian who works in higher education, researches technological-utopian thinking and likes to write about art(ists). She has contributed to the magazine Puntkomma and the online platform In Proximity to the Arts.