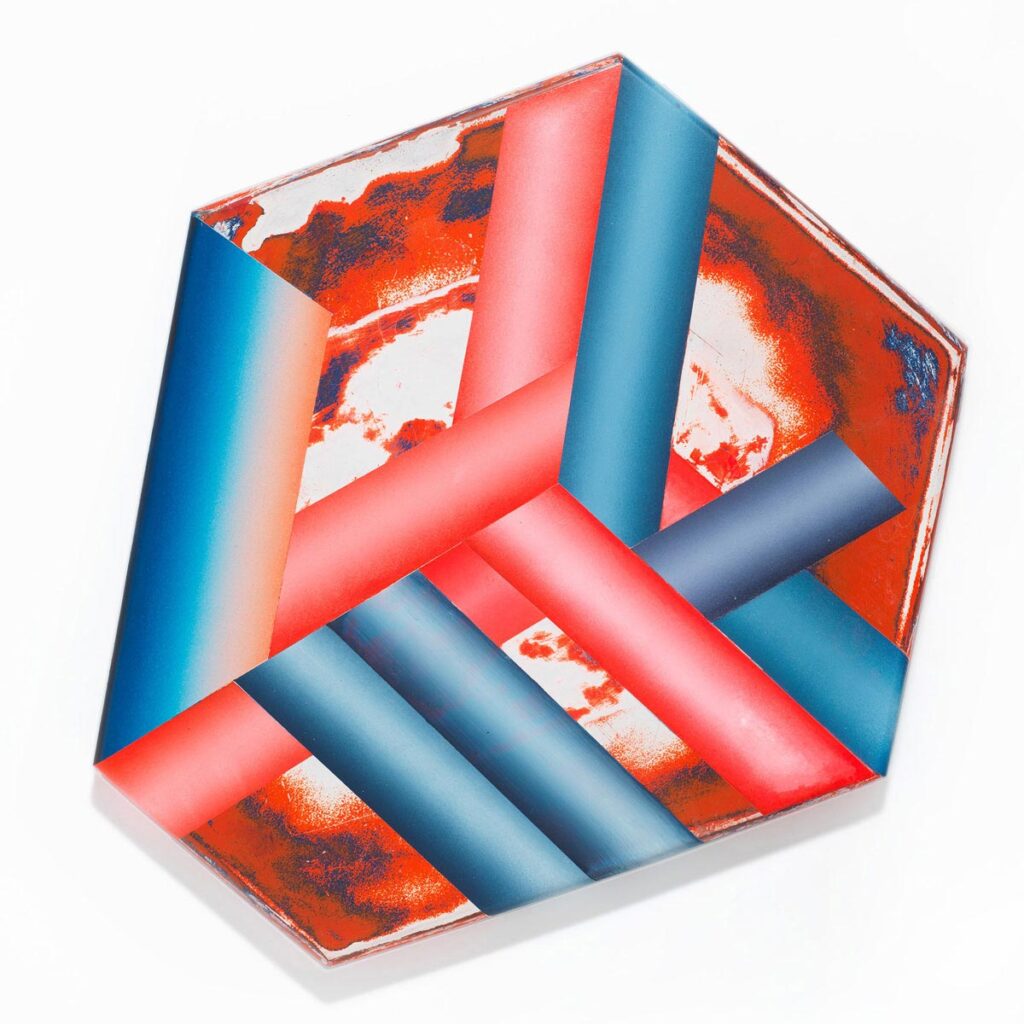 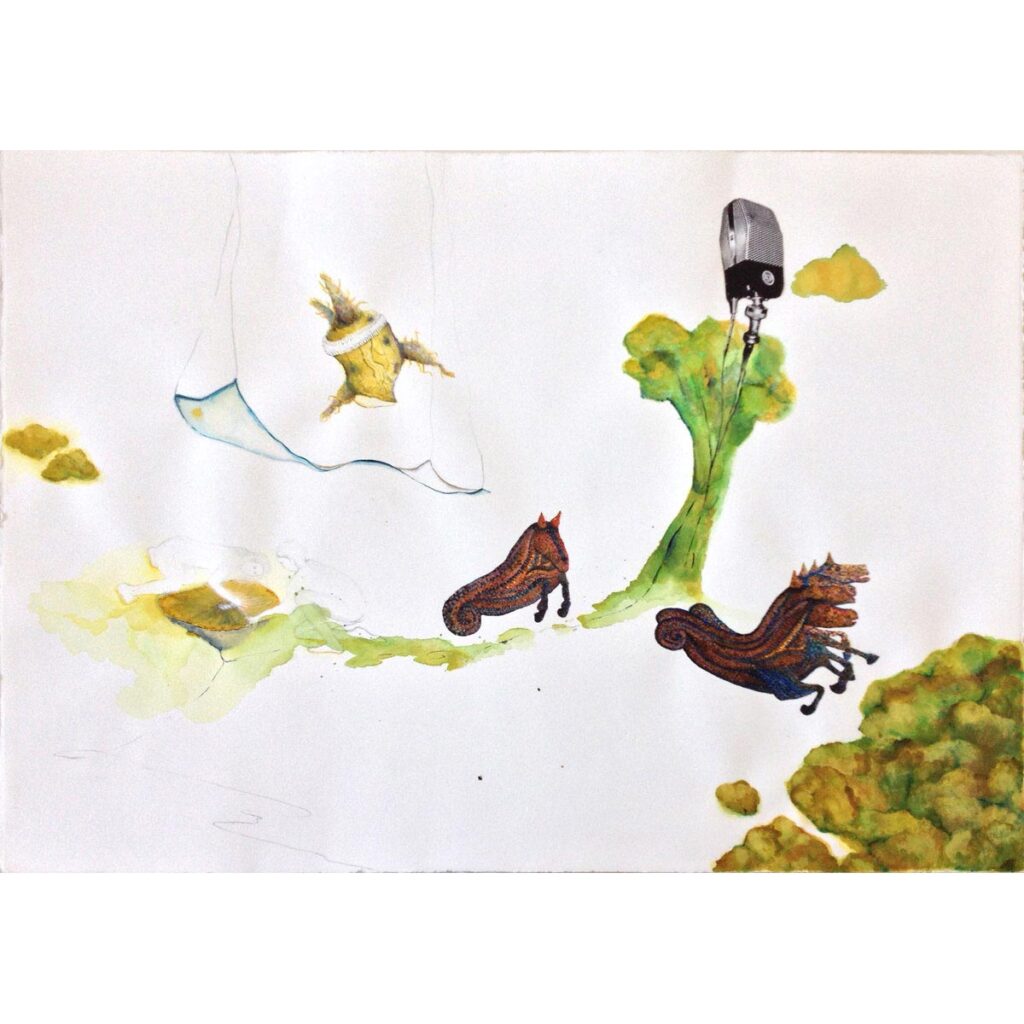 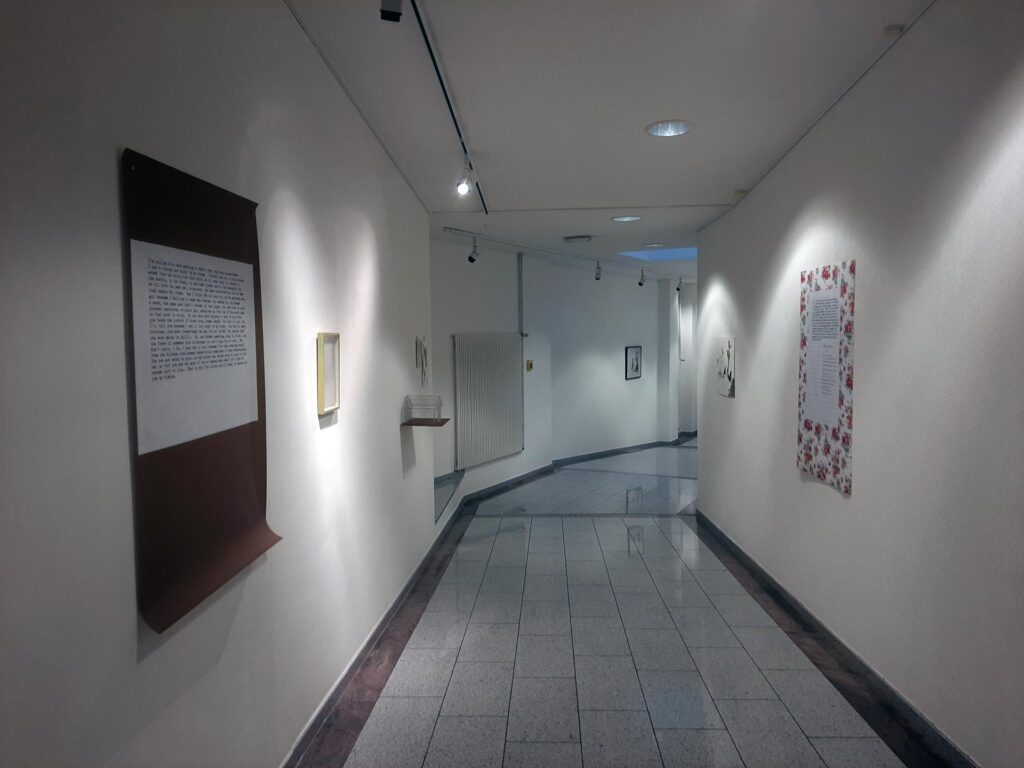 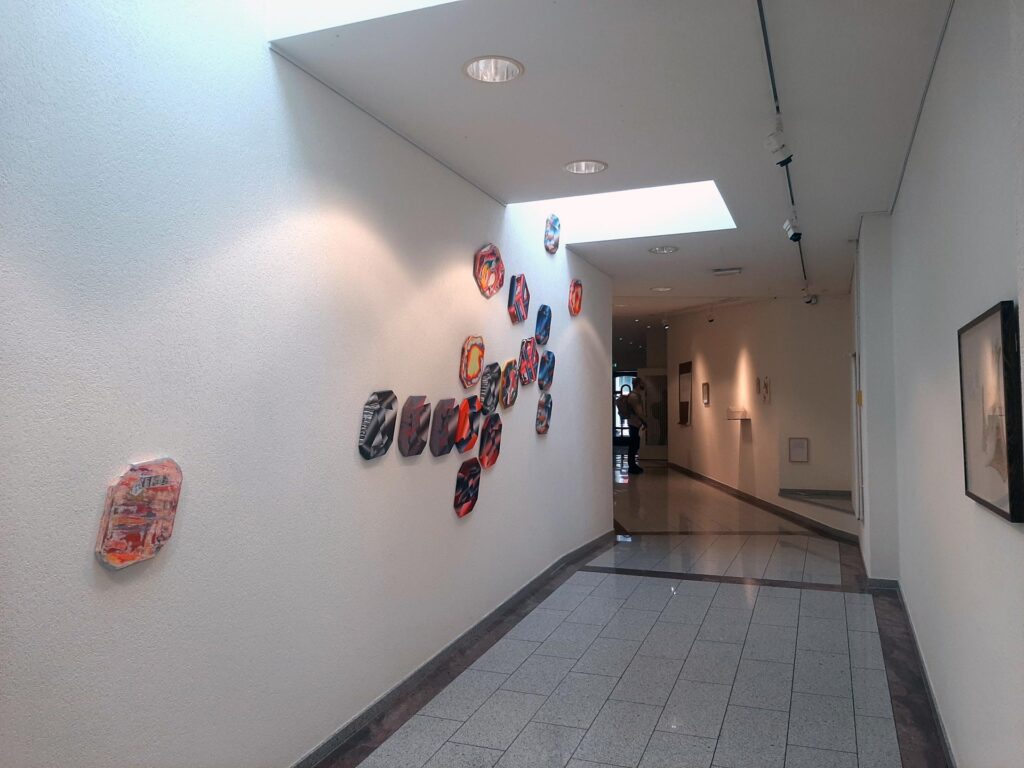 This interview ties in with the intention of the curators of Passages en Passant: to facilitate a meeting between the work of two artists in the corridor of the Goethe-Institut, which is used as a  special exhibition space. The interview focuses on the interaction between the artists, their interaction with the space – and the place of each other’s work in it – and the interaction of the visitors with the work. The interview is designed as a two-way conversation in which the artists complement each other.

Barbara: I only knew Rachel by sight. When we were invited to exhibit, I tried to look her up online. That was not easy – she has no social media accounts. When I finally saw her work I was surprised by how good I thought it was.

Rachel: My lack of social media presence is intentional and my website is rudimentary and only has one image. Besides, there are many artists called Rachel Carey.

R: I did know Barbara’s work, by a funny coincidence. Over the Easter weekend my boyfriend and I were walking with friends and one of them, Carolin [Lange], said that I should look at Barbara Helmer’s work because she thought I would find it interesting. So I looked up her work on the websites of the B.a.d. foundation and the CBK. I expected Barbara’s work to be somehow similar to mine, but it was very different, very graphic. But I liked it; I like the combination of meticulousness and punk-like freedom in her work. And I like the movement that her work suggests – there is direction in it. So when Kathrin [Wolkowicz] called and suggested that Barbara and I do a show together, I thought, ‘I know her work, this is exciting!’

R: I did not know the space, but it is special, with the bend and the overhead light.

B: My mother is from Germany and I took lessons a few years ago – I did the C1 and C2 exams in German here. So I knew the space; I found it a fantastic exhibition space. I have participated in a group exhibition here before, by Appendix. Through them, I ended up in Dresden last year for a residency – also great; there will be another exhibition about that project here. A while ago, Marco [Douma] came by, who has been following my work for a while because he also has a studio at B.a.d, and he said: ‘now it’s getting good’. And now he asked me to exhibit the paintings I made between 2018 and 2020 here; fantastic!

R: Kathrin asked specifically for my text works. I was reticent because they have different voices but all look the same. Also, I know people are generally kind of lazy and don’t want to read texts. Kathrin suggested to make them bigger and so I did. Now they look like posters and I really like the format, it looks like propaganda in poster format. The posters all look alike, they’re all written on the typewriter – but they have very different voices and to show that, I added subtle hints of personality to them. For example, for the potato one I scanned a potato skin for the backdrop, for another one old kitchen wallpaper. I’m in a poster push now.

B: Our first meeting was here, downstairs, the four of us. Then a holiday passed and after that we just did it.

R: Barbara just went at it. She was done very fast. She’s a woman with a plan. That actually gave me peace. Because we did not have to do the usual polite negotiation, where in the end nobody really gets what they wanted. Now I could just work around her decisions. But still I was really slow in deciding what went where, in deciding how to install the works. I’m an indecisive person, so sometimes it is nice when people make decisions for me: one down; twenty more decisions to go. I was not overwhelmed by Barbara’s work; I was busy with reducing the number of my works and deciding what would go where.

B: It has been a long time since you have shown your work. I do it more often, so it has gotten easier for me. I had just done a fair, This Art Fair, so all my work was packed up and I could bring it here; I showed the same twenty works here. At first, on the advice of a coach, I had hung very few works at the fair, leaving some space, but I didn’t like that, the museum hang – it can become very boring with this work. So after two days I had filled it up anyway and then I liked it. And the work can also be sold. By hanging it this way, people can see that some works fit together very nicely and think ‘I’ll take two, or three’. Here, some interested people do come to have a look.

B: For the installation here, I realized I already had something in mind – I wanted the high wall. You can go up to almost five metres high here, towards the daylight. First I laid it out on the floor to see roughly what should go where. You can enhance it by hanging it properly. I like contrasting works, but also tone next to tone. Sometimes you see that they weaken each other, then they shouldn’t be next to each other. But it’s all very intuitive; that you start looking differently, that’s what it’s about. Then I started hanging them, making some adjustments: swapping some; adjusting the height. I did most in one day; maybe three or five the next day.

R: It took me more time. The posters were new, and were a discovery for me, and they also changed the other works because they’re in relation to each other – that can already be complicated in your own work, but more so in relation to somebody else’s work. Even your own work needs to make space for each other. The building up process was very intuitive, organic. I worked around Barbara´s work in a way that complements both our work.
I think with my work and hers, both of our works are quite charged, in a good way. That made it important to leave breathing room in between. Otherwise our works would cancel out each other’s charge. My work is rather earthy and her work burns. Her work required freedom. There, on the wall, Barbara’s work could move; it wants to move like a flock of birds. That made for a really nice contrast with my more linear work. I have really technocratic work; it does not want to move. Intuitively we did our own thing and it worked out really beautifully. We observed each other working and in that we listened to each other. I think there is a really nice flow.

R: This exhibition is halfway between a solo and a group show. It’s sort of two solos, but people always look for connections, similarities and contrasts when you put two things together. I liked that I saw connections, but there’s not a theme – but people are going to look for a theme.

Eva Visser is a Rotterdam based historian who works in higher education, researches technological-utopian thinking and likes to write about art(ists). She has contributed to the magazine Puntkomma and the online platform In Proximity to the Arts.