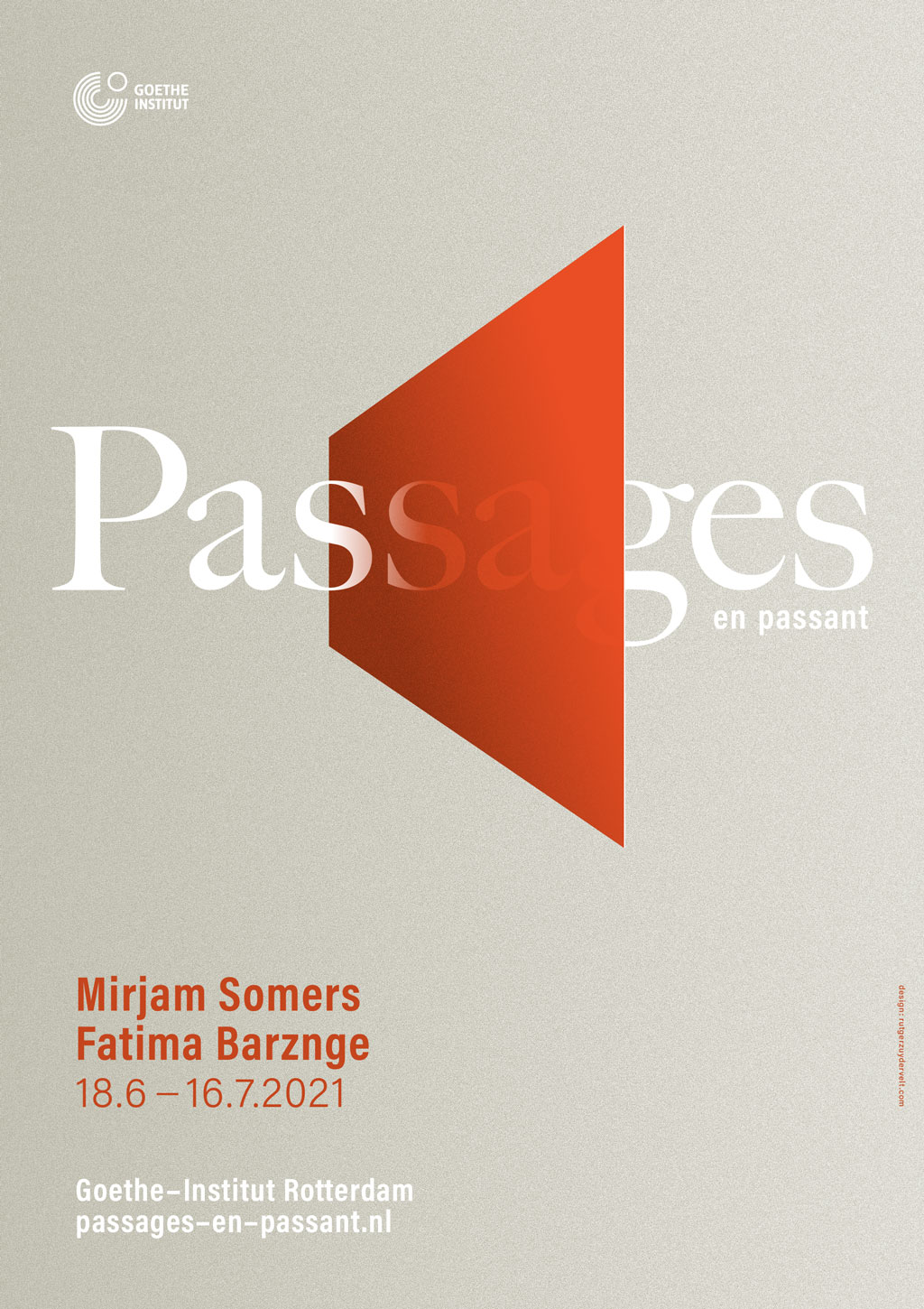 Passages en passant is a series of exhibitions in the corridor of the Goethe-Institut Rotterdam, each time showing the works of two artists in dialogue with each other.
This format is intended as a space for exchange with and through the works, a trigger for conversation and a meeting place for interested people.

In this first exhibition, we are showing works by

From friday 18 july until friday 16 july.

You are warmly invited.

Lees meer over de serie Study of Square / To my Generation

The ruling principle in the work of Fatima Barznge is memory. In her paintings and works on paper she revisits the places, objects and atmospehers of a birthplace, cultural world and childhood to which return is impossible.

Read more about the Study of Square / To my Generation series

Since 2017 the square is my subject and all works are made in a square format. The underlying idea and inspiration for this subject is the square found in geometric Islamic art, in which it is the foundational form of elaborate patterns in architecture, tiles, mosaics, wall decorations, textiles…etc.
In my work, I take this idea and I make it my own.

The idea behind this series of works comes from the form in which within the Islamic tradition/generation of my parents, the name of god is decorated on tiles, on other materials and objects as a souvenir. Decoration and souvenir are linked to and symbolize the journey and paradise. Thus 99 names of God are depicted, to carry god close and remember him. I transfer this principle to my situation where I have painted on paper 100 names of people whom I personally appreciate and want to keep close. People who had and have made an impression on me. Names that I have a particular memory of in the past. These names are of Middle Eastern and Western artists, writers, philosophers, scientists, poets, composers, directors, actors and singers. In this work, I also show how East and West inspire each other with some of the names. 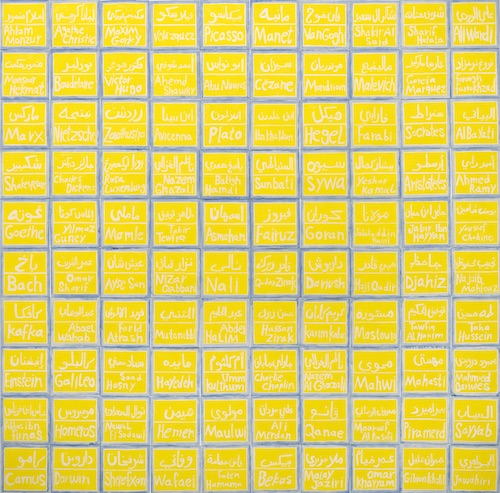 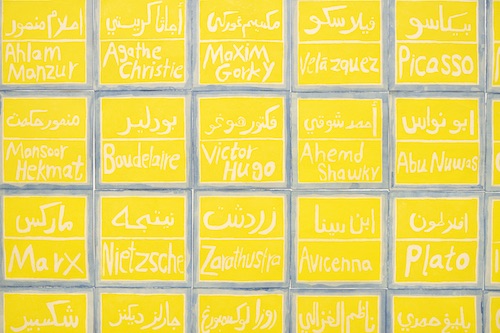 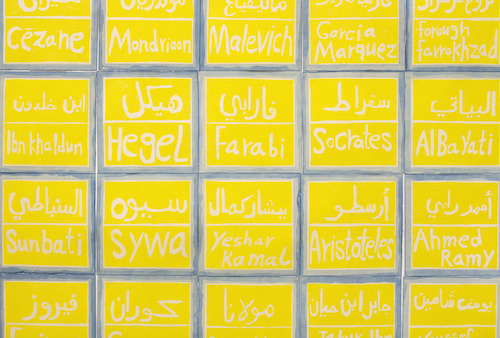 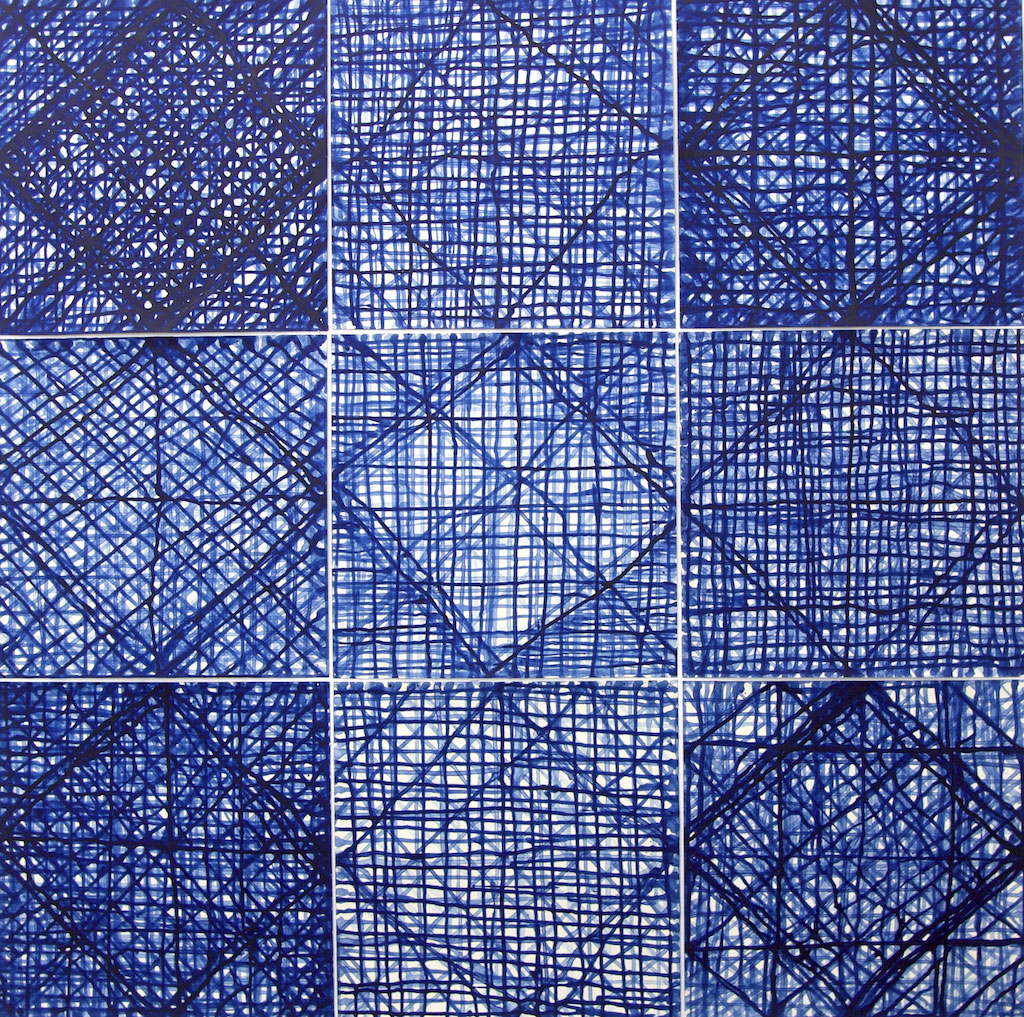 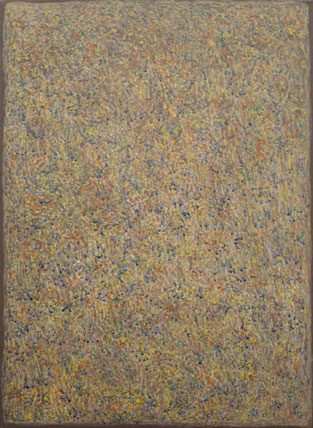 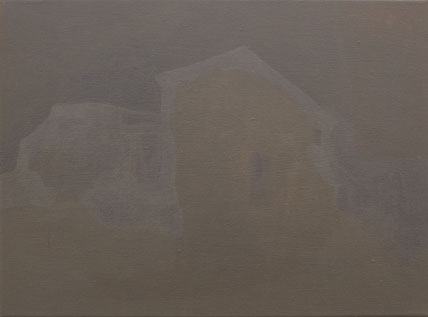 A house from clay

Who hath charity? This bird.

Who suffereth long and is kind,

Is not provoked, though blind

Who hopeth, endureth all things?

Who thinketh no evil, but sings?

Who is divine? This bird.

Mirjam Somers makes drawings and video works about the relationship between humans and animals, sometimes touching, often disturbing. In her work, she seeks both the absurd and the poetic.

Who hath charity? This bird.

Who suffereth long and is kind,

Is not provoked, though blind

Who hopeth, endureth all things?

Who thinketh no evil, but sings?

Who is divine? This bird.

Animals mean everything to the artist Mirjam Somers (1971).  The connection between animals and people, the bonds of fate that bind them together and their mutual right to existence are linked indissolubly in her art.  Long ago, men and animals were like one another and shared the earth fairly together.  But gradually a change in this natural relationship came about.  Man thrust himself into the role of lord and master of creation; animals and nature became subject to the force of his actions.  So overweening was his self-confidence and so hard his rule, that animals were scarcely left any place of escape.  They were driven out of jungles by deforestation, run over and left for dead along highways, robbed of their horns for ivory, shown off behind railings in zoos or jammed together in cattle pens.  In due course the age-old symbiosis between these two sharers of the earth became eroded.  So deep did the chasm grow between animals and men that in time they came to seem like kindred spirits who have drawn away into totally separate worlds. The relation between these mammals, who might really co-exist so well, could hardly have ended in their growing further apart. Animals have suffered a big injustice; at heart they live now in discord with their fellow-creature, man.

Since childhood onwards, Mirjam Somers has found this unfriendly attitude of men towards beasts distressing.  She wanted to go to the barricades for the ‘dehumanization’ of animals.  She did so in her own way; her barricade would not be the usual obstructive type of road-block.  Somers gave her scene of battle the simple name of Daily Drawings, a ritual repeated each day on A4 watercolour paper, using brushes, acrylic paint, charcoal, coloured pencils, pastel crayons and retouching tones as the basic ingredients. After a morning walk, she closets herself firmly in the fortress of her studio, always with the cadence of music for company.  With the first lines and strokes on paper she starts on a new journey every day, under the influence of her own state of mind and of pictures which she digs out from her photo collection, from old family albums, or from newspaper articles.  A genuine adventure, since it’s not clear in advance how her journey will develop. The result is a sequence of explorations that often end in undeniably heart-wrenching images, sometimes with an ingredient of distress or horror.

Like the pandemic that has gripped the world since March 2020, these single, small-format scenes seem to want to take the viewer by the throat, one by one.  Disarray, alienation, discomfort or concealment are ever-present.  Muzzled beasts and masked figures in white are a recurring theme.  They seem trapped within the shadow they cast, fixed in a terra incognita from which there is no escape.  Sometimes they are enclosed in short texts.  These set out no special storyline.  They seem to function instead like whisperings in the background.

Starting in the Spring of 2020, Daily Drawings has expanded thus far to 200 fragments from a visual diary: tiny universes with no context to speak of.  They confront us with a period of imprisonment in which it seems to be permanently night and the steadiness of our lives has become completely unsettled.  Man and beast in these pictures have sometimes been fused together in an in-between state of existence: a crow’s head balances on top of one man’s shoulders, while the face of another man makes way for the snout and drooping ears of a rabbit. It’s as if Somers is trying to heal the fissure between homo sapiens and his animal counterparts and restore the old interconnection between them. As if she wished to say: reconciliation is still possible – as shown, for example, in one quiet exchange between a heron and a clown on the banks of the Schie.

At intervals, gentler moments slip into her field of vision: a dog stretches out its paw and is surprised by a robin, or an ape plays with a small snowman.  Or she places bright-red cherries under her magnifying glass, remembering her grandmother’s cherry orchard.  What fun in those days to spit out the cherry stones!

Daily Drawings are icons of a time when reflections on our existence have overwhelmed us, a time to be still, and a time to let go. The word that is the key to these still-lives is urgency.  They thread together like scenes from a long and disturbing film, filled with the alternation of silences and the sound of sirens. 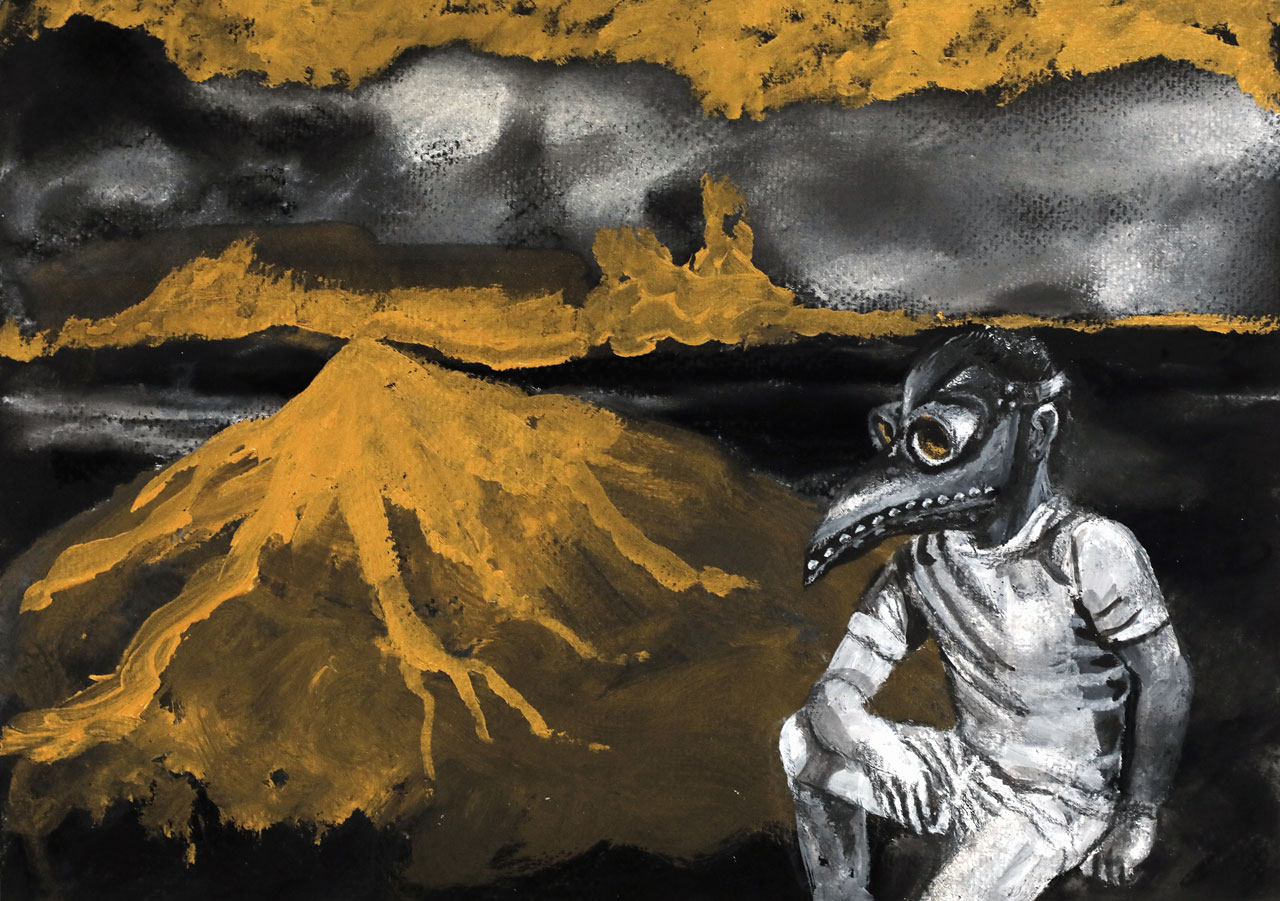 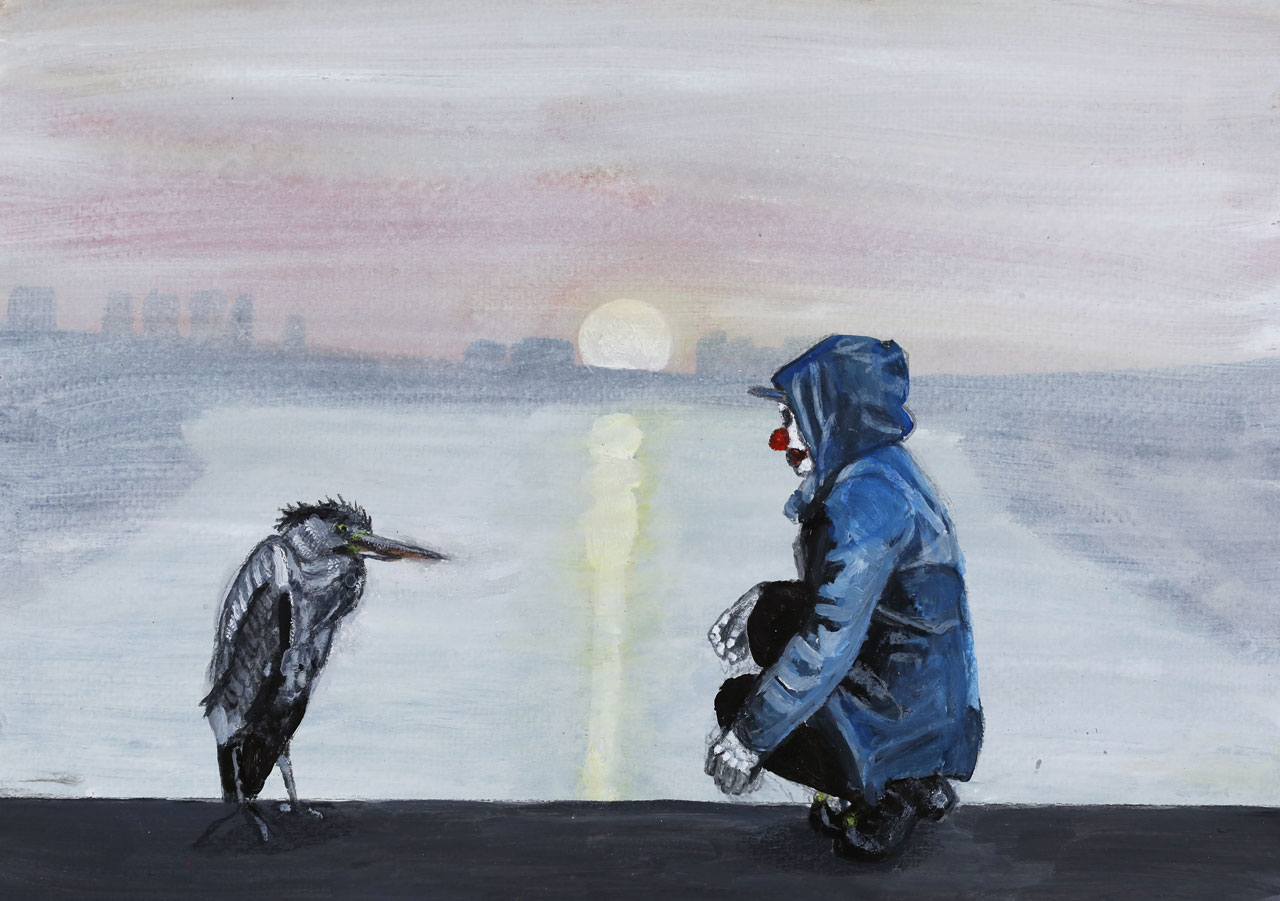 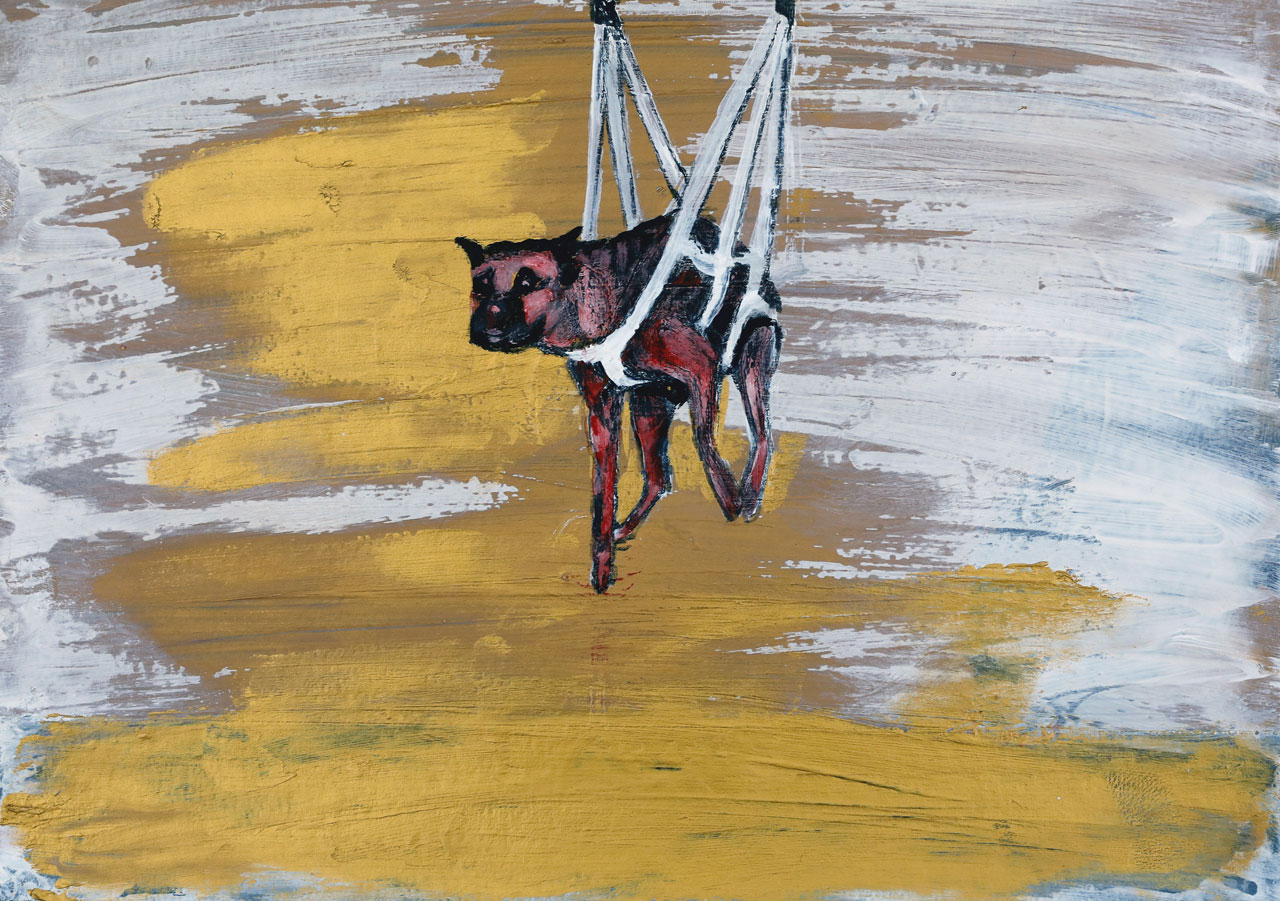 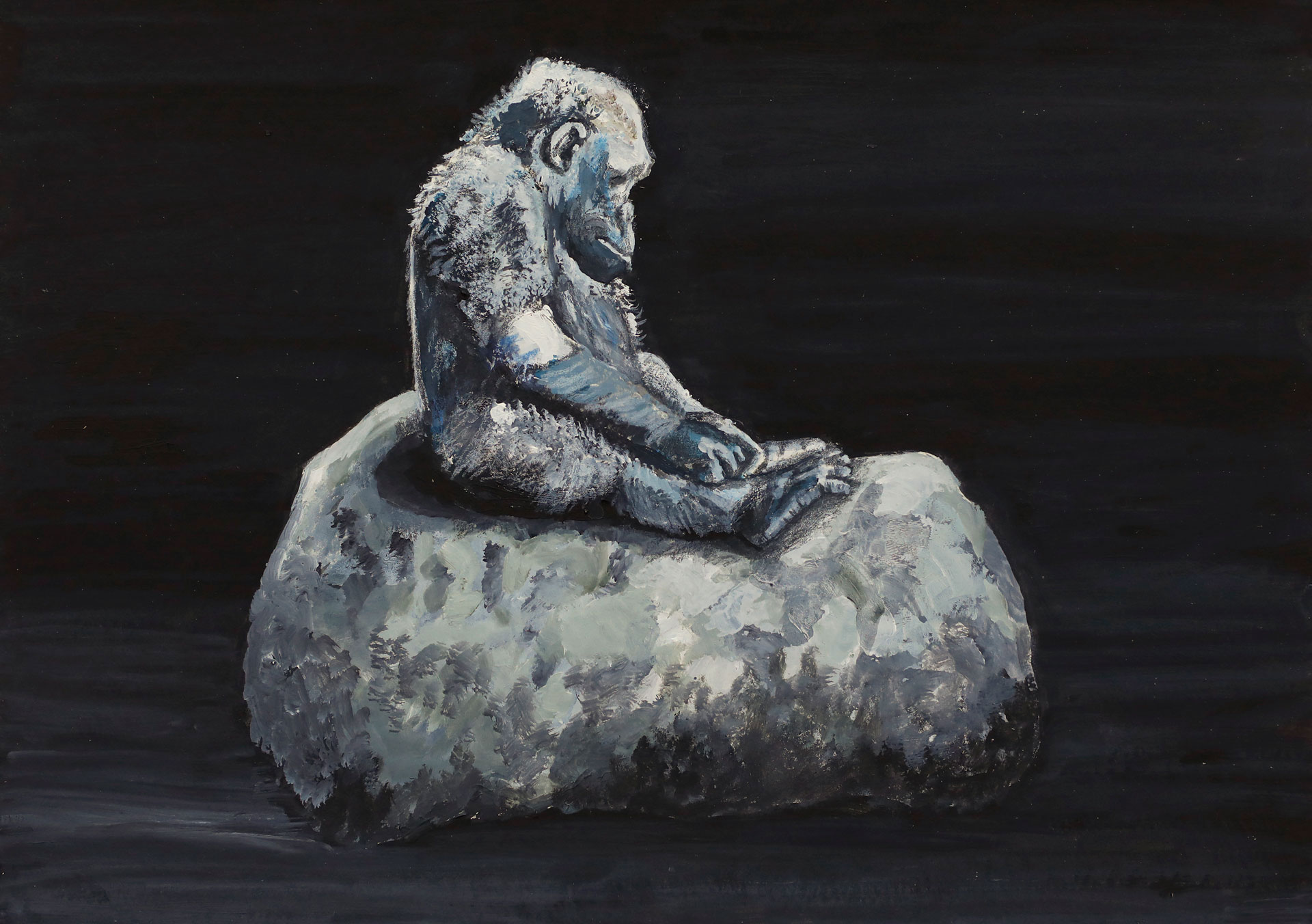 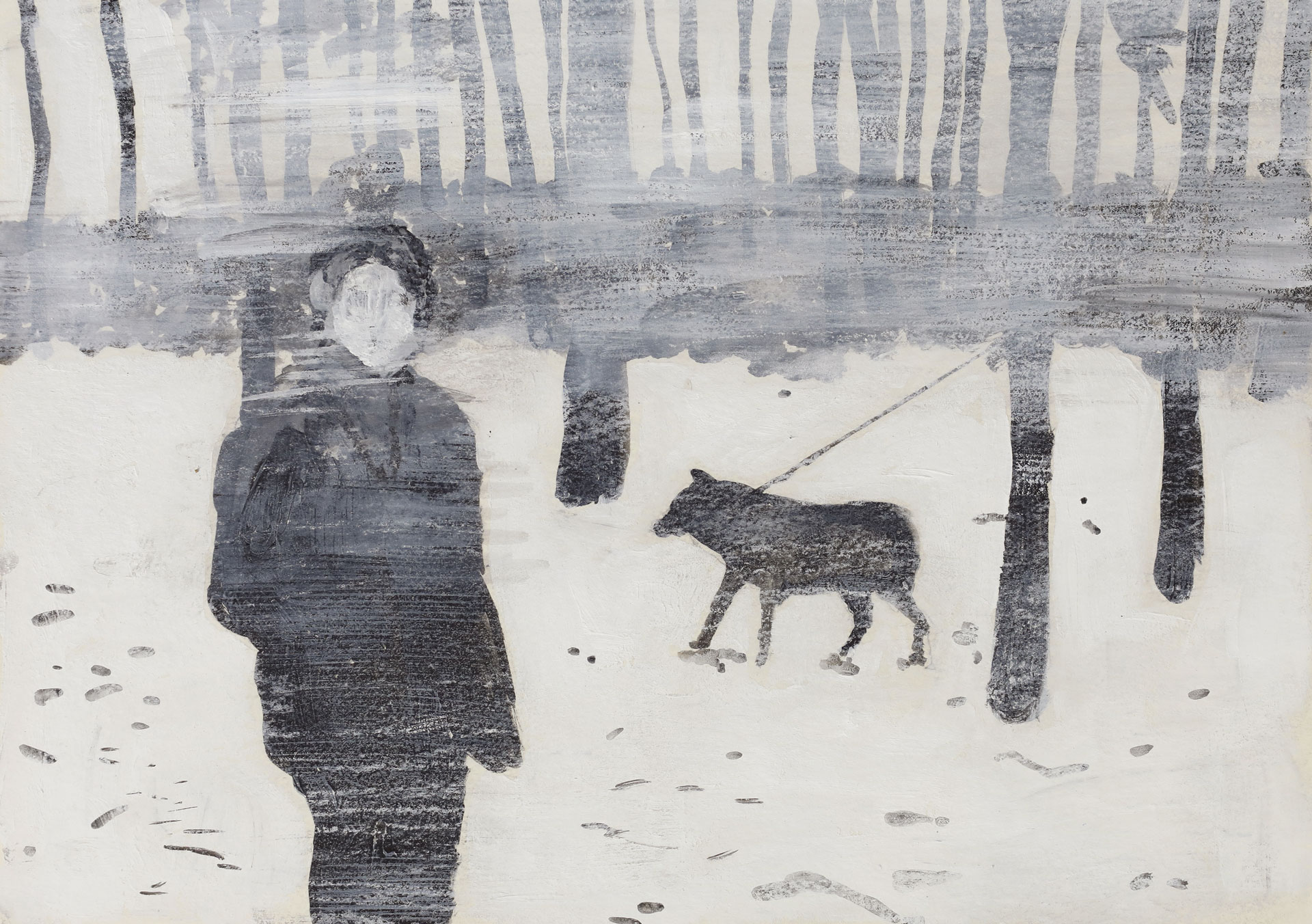 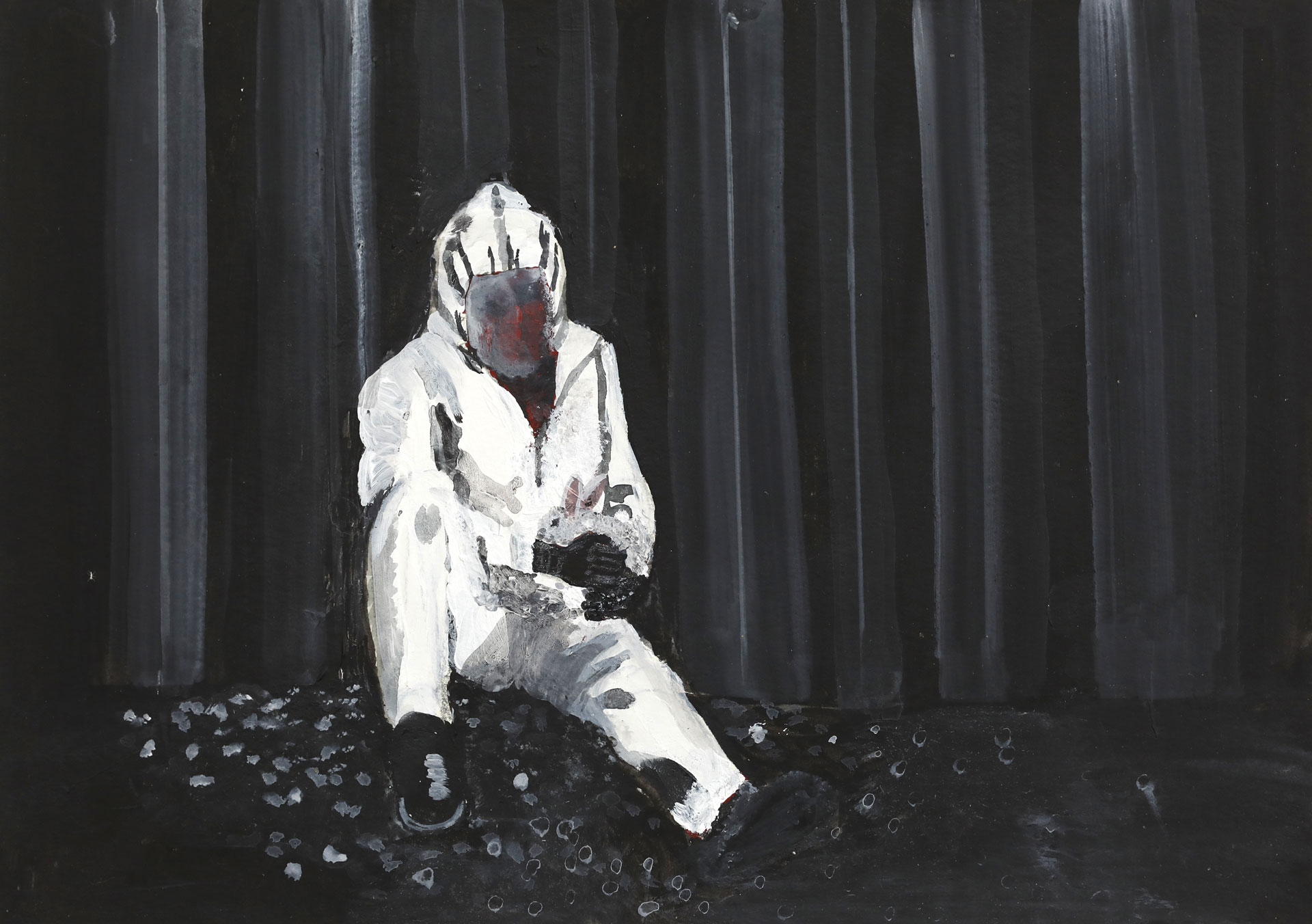 Passages en Passant is a temporary exhibition space in Rotterdam.

Passages en Passant stretches out in the Goethe-Institute Rotterdam in a hallway that connects the entrance area with the cafeteria. The passageway has roof lights and is slightly angled, but as with a tunnel, the opposing walls are so close that the space they embrace becomes a mere walking area. The passersby´s gaze, when not focussed on the openings at both ends, meets the huge walls to the left and right, which usually don´t compel observation.

This is where Passages en Passant likes to arrange, test and contemplate. In a setting that is highly transitory and practical, artworks are implemented that are fit for rapid comprehension and at the same time slowly unfold when being looked at with rest.

In a series of six exhibitions, with each the corridor space is rendered by the works of two invited artists that respond to the various qualities of the space’s content or by positioning, and thereby propose new relations among the works as well.

Passages en Passant is run by Marco Douma and Kathrin Wolkowicz, both Rotterdam-based artists who continually like to contribute to Rotterdam´s vibrant art scene (and beyond) with art works, hosting and organizing events and curating exhibitions.

Marco Douma is a multidisciplinary / multimedia contemporary artist. He concentrates on (moving) image and sound, where time and space are dissolved, creating a moment of inner reflection and layers of meaning are subtly incorporated into images taken from daily life.
Marco is a member of the artist initiative Stichting B.a.d. in Rotterdam, with whom he develops national and international projects. He also frequently collaborates with Rutger Zuyderveld and Roel Meelkop in projects such as Pierdrie. He is also the founder of the multimedia agency Beeldhonger.

Kathrin Wolkowicz´s work spans from performance, installation, objects and books to film and video, and is usually kindled by self-written or adapted texts. It is a proposal of time-based or spatial situations that invite for re-reading one´s relationships with objects and bodies; how we dwell, spend our time and share the space with others.
A substantial part of Kathrin´s practice is working collectively, as founding member of Sils Projects, programmer for Suburban Video Lounge, part of 004-collective and Borgerstraat publication collective. For some of her recent works she has exchanged the studio for the street to lay out common grounds with inhabitants of areas affected by city development.